Panda Magic is a 5-reel game that is part of the Aristocrat Dragon Link series available at the Heart of Vegas casino. It is a social play slot where you cannot win any real money sadly. To play the Dragon Link games for money your only option is to visit your local casino that has Aristocrat pokies machines.

Based on the endangered animal, you will be spinning symbols of the Panda and other animals related to Chinese fortune. The game has four levels of jackpots, a hold and spin feature, wild, and scatter symbols.

NB: We have not seen any real play online games in the Dragon Link Aristocrat slot series but many free games in this genre can be enjoyed like Golden Century or Happy & Prosperous.

Take a spin on some of our free Aristocrat pokies here. 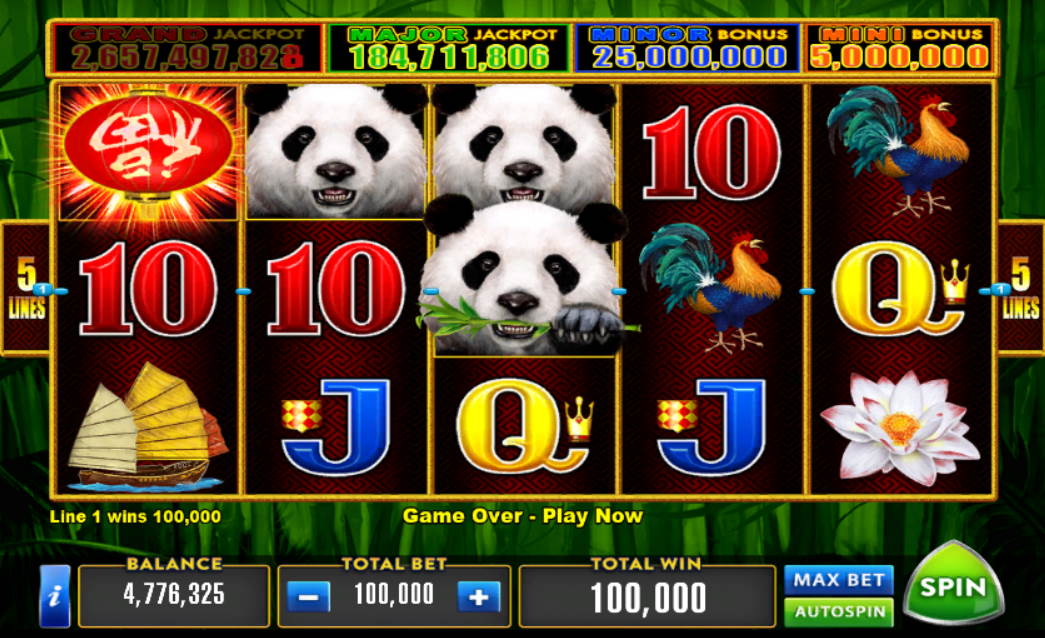 The high-value symbols are:

The low-value symbols are 9 to K, and they pay between 5x and 75x per line bet.

Here is the paytable for the high-value symbols. All of these are multipliers that are applied to your bet per line. They do not change whether you increase or decrease your bet.

You can wager between 10,000 and 20,000 coins. Since there are only five fixed paylines, your bet per line is equal to your total bet divided by five. The prize on the table will be multiplied by your bet per line.

To win, you only need two symbols of the same kind landing on adjacent reels. The first symbol must start on the leftmost reel. The more symbols there are on different yet adjacent reels, the more coins you win.

Here are the main features:

All coins for the scatter are used against your total stake. You can win more free games if you land at least three scatter symbols in the free games bonus.

In this feature, you will be awarded with three re-spins. All reels that have an orb will stick, and the other reels will spin. If a reel lands an orb, the free spins resets to three, and it will stay sticky.

The other reels will re-spin. Bonus ends once you are out of free spins or you won the grand jackpot.

We will rate this slot with 8 out of 10 stars like its predecessors and sequels in the Dragon Link series. It has several jackpots that you can win, and you do not even have to bet that high to win the mini and minor jackpots.

It is also good to note that the slot requires only two symbols to land a winning combo for the high-value ones instead of three.