Megaways are without doubt the most popular go-to slot machine at online casinos. They make IGT, Ainsworth and Aristocrat pokies as much fun as a warm beer.

As you know it no secret that many of the world’s most popular slot games have origins from the land down-under. The Megaways system was also born and bred in Sydney, Australia by Big Time Gaming. The first pokie in the series Dragon Born was released into the market back in 2015, well sadly it was not a big success with players.

When the Bonanza slot game was launched in 2016 the Big Time Gaming Company really got into the major league of casino game makers as players really loved this slot right from the get-go. Seeing how popular the mechanic has become the Megaways system is now licensed to many game makers including WMS, NETENT, Microgaming, iSoftBet, Red Tiger, Blueprint, ReelPlay, Pragmatic Play, Stake Logic and Relax Gaming of just a few of note.

The main reason that sets these games apart from others is the unique random reel modifier that transforms the amount of reel symbols that appear on each reel on each game spin. Basically, in a nutshell on every spin a random number of symbols appear on each reel, this can give you tens of thousands, hundreds of thousands or even a million ways of winning some awesome pay-outs at every spin.

By the very nature of the ways to win format these games are of a high or medium volatility, so you are not going to get a lot of small wins. However, when you do get a win it may just pay very nicely.

It sounds like rocket science but believe me even Grannie will understand how these games work as they are really simple overall. In a normal Megaways game you will have six game reels and up to seven game symbols that will land on every reel, ok simple yes.

The amount of game symbols that appear is chosen randomly by the Megaways algorithm. So, the reels stay fixed but the symbols constantly change hence the constantly changing different amount of ways to win on every spin. Ok as a basic when all the six reels are showing the maximum amount of seven symbols for each reel. 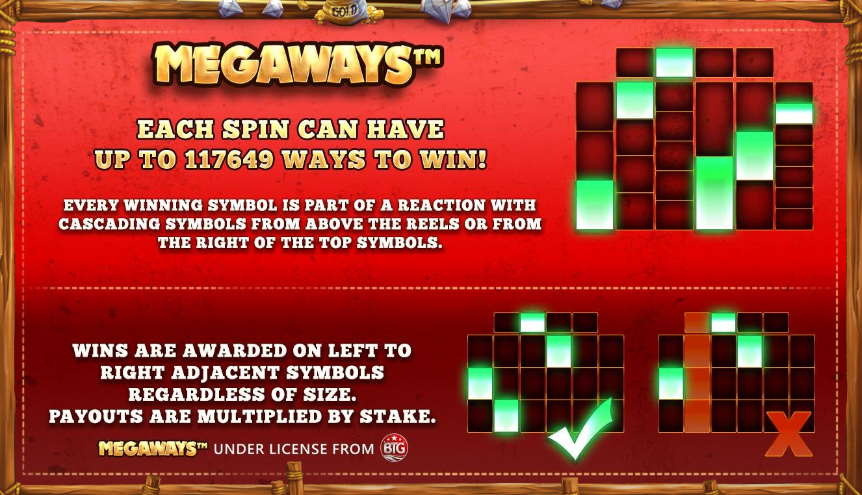 The games come with all the regular wilds, scatters, and free spins features but the big kicker is a whole bunch of other exciting bonuses. We mention just a few below of many that are available at present.

This is not a unique feature to Megaways games and this feature has been about for quite a bit. You may know it or seen it as reactions, avalanches or cascades. When you get a winning set, the symbols explode off the reel grid so more symbols fall down into the gaps so much pays come your way.

One bonus that builds even more on the above cascade feature is the progressive win multiplier. The first with is a multiplier of x1, which goes up by +1 for each cascade. So, with more cascades, the higher the multiplier will grow. The best part is that during the free bonus spins, the multiplier value does not restart and just keeps on going up.

When mystery symbols appear, they all change to show the same symbol thus providing some extra pays. Normally they are scattered or stacked around the reel grid.

Wild multipliers can also become sticky on the reels with two or more having their multipliers even multiplied together for huge possible pays.

This feature is available in some games and it gives you the chance to purchase the bonus game, why wait in line right? Get the express pass to the bonus feature, well at a cost of course. This feature is a bit controversial among some governing licenses and groups so UK players with not have access to the bonus buy feature as it’s banned.

When you score this feature a wheel is shown, you the ability to get up to 24 free spins. You can choose to take the free spins as is or gamble them on the reel to get more spins or you can obviously lose the lot in this gamble feature.

We have more than 80 free Megaways games for our visitors to play with no sign-ups or validations required to enjoy in them in demo mode.

The Megaways system has no jackpots to mention, well with so many ways to win who needs a jackpot feature anyway. Not only does the Megaways mechanic make these slots a cracker to play you also have a myriad of bonus features in-play.

These games make slots with Aristocrats Reel Power 243 ways to win look like antiques so it’s only going in one positive direction for Megaways slots these days. No matter if you play for free or play for real Megaways games are your best bet.