Join a colourful Mexican Mariachi man with his Chihuahua dog on the reels in the Pragmatic Play Chilli Heat Megaways slot machine.

The original Chilli Heat slot machine was first released in January 2018 and it was quite a popular pokie using a Mexicana festival theme. Much has changed for the sequel in Chilli Heat Megaways which was released in August 2021.

The graphics are much better in this version and the background vibe is more dominant visually plus you have many more features in this game that has a whopping up-to 200,704 ways to win plus a bonus buy and ante bet feature that is also is available for most countries – (bonus buys not available for UK players). 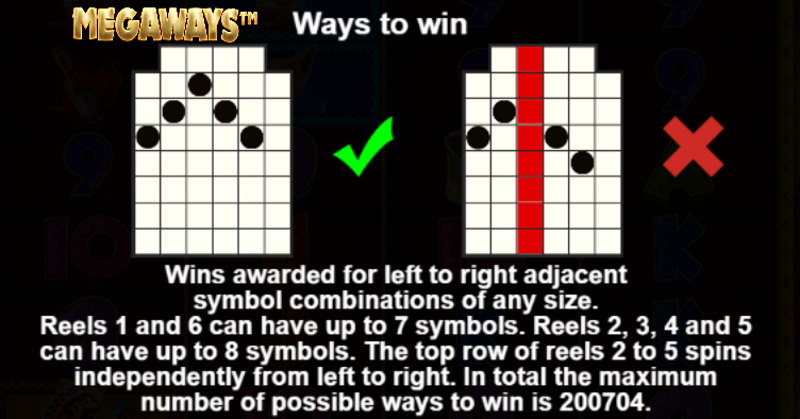 Pragmatic Play has recycled and used the original Mariachi music which is common at events and celebrations in Latin American countries. While going for an ultra-fun vibe on the reels and background you will see pleasing pastel colours like pink, purple, green and orange used predominately in the theme and symbols. The game is set on a Mexican village street during a local festival event so the vibe is one of music and fun. 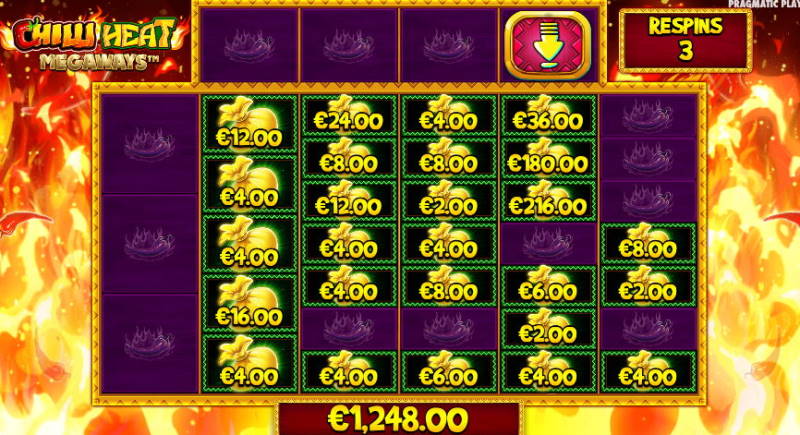 Wagering and Ways to Win

The Chilli Heat Megaways can be enjoyed on any mobile device or desktop and you can wager stakes from £/€/$0.20 to £/€/$125 per spin if you like livin’ it large.

With every spin you get a different amount of symbols dropped onto the reel set. You will have from 2 to 7 on the main reel set and 4 on the very top horizontal reel set. This itself is the standard formula of the Megaways mechanic in general.

This means the ways to win changes constantly with up to 200,704 winning ways on just one spin. You will need left to right matching adjacent game symbols from the very first reel to form a winning pay.

The RTP is a constant 96.5%, no matter if you are playing in the base game, the Ante Bet or buying the bonus mode.

Look out for the premium symbols on the reels like the Mexican man, the dog or the chilli sauce bottle to win 10 times the stake made. The wild is the Chilli Heat symbol with no real value, but they substitute for all regular pays. The wild symbols will appear only on reels 2, 3, 4, or 5. 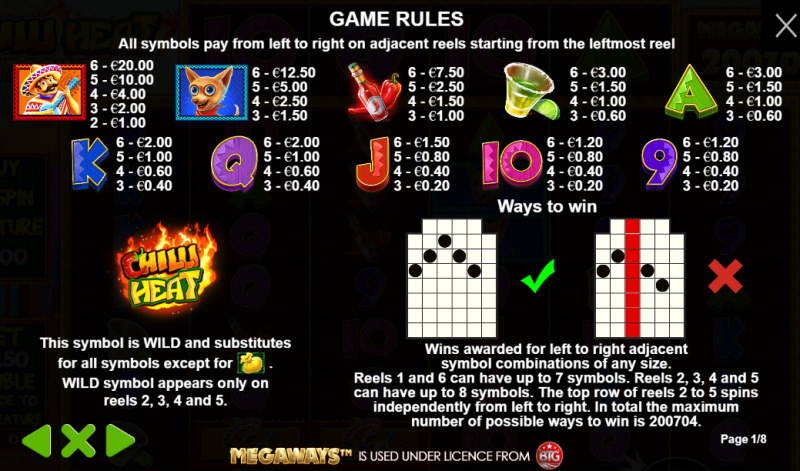 Volatility of the Game

Volatility is at a very high level and rated 5 out of 5 on Pragmatic’s lightning strike meter so it’s a win big or go broke game just like most Megaways games are.

The symbols used are A, K, Q, J, 10, 9 cards for the low pays, then the Mexican Mariachi man, a Chihuahua, a chilli sauce bottle and a tequila shot are the big paying symbols in that order.

No free spins are available in Chilli Heat Megaways which is odd but unique. Not to worry as in their absence you have the respin feature, tumbles feature, an Ante Bet feature and the controversial purchase respin bonus.

The tumble feature will start from a base game pay, the winning symbols will disappear and new or other visible symbols just drop into remaining positions. This can possibly get you more symbols lining up to form pays, best of all the tumble feature keeps running until no more wins are landed.

The Ante Bet is an optional buy-in which is available any time in the base game for select countries only. For 25% more in credits on top of the wager you can double the chances of triggering the respin feature.

The money bag images are the key to the getting the respin feature activated and these will appear on the main reel positions. Money symbols can take on a random value also and getting 6 of the will activate the respin feature.

The respin feature is happens on the same grid but all other symbols are removed except the for the money bag symbols. The bonus will begin with 3 spins with reels 1 and 6 are initially locked in place.

If you land more money symbols on the main reel grid, they are locked in position and the respin counter starts over again. But wait there is more! on the horizontal reel set above the main reels you will have more special symbols landing with the following variables adding to the fun: 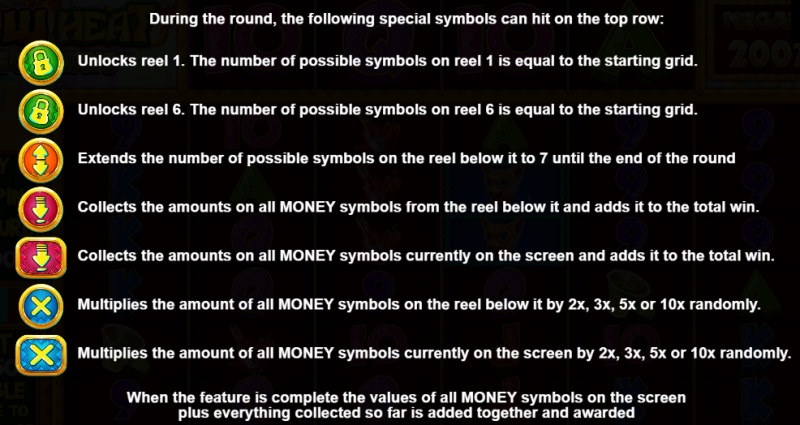 Depending on your location in this game you have the ability to purchase bonuses or extra ways to win for those punters who just cannot wait. Players from the United Kingdom usually would not have this option visible as it’s banned by the gaming authorities.

The game has a turbo spin, quick spin and auto spins option for up to 1000 hands free spins.

The graphics and vibe in this game are really great, the potential for some big wins is possible but not guaranteed due to the high volatility, players get the awesome benefit of the Megaways mechanics and tumbles in the base game play in Chilli Heat Megaways.

The game can provide massive wins of up to 5,000x the wager made in just 1 spin so this in itself is quite appealing plus we do like the option of fast tracking the bonus with the buy it now option.

The game is a fun and colourful Megaways slot to play, if you like pokies like the Aristocrat More Chilli game then you should love playing the Chilli Heat Megaways as the theme vibe is similar. This slot can be played for free on our site or for real money gaming at suggested online casinos with Megaways slots.