The Zorro Aristocrat slot was released in 2004 in land casinos, the theme revolves around the famous masked vigilante of the same name. It comes with a setup of 5 reels, 3 rows and 25 paylines, along with an RTP of 95.5% and low to medium volatility. The bet size is set at a minimum of $0.01 and a maximum of $0.50. It also comes with no less than 6 special bonus features:

All the symbols are related to the legend of Zorro and include barrels, coin pouches, horses or the classic playing card icons. There are two special symbols here – Zorro himself as the wild and his trusty horse as the scatter.

These are joined by a series of medium paying symbols, as follows:

The slot game’s roster of symbols is completed by the low paying icons below: 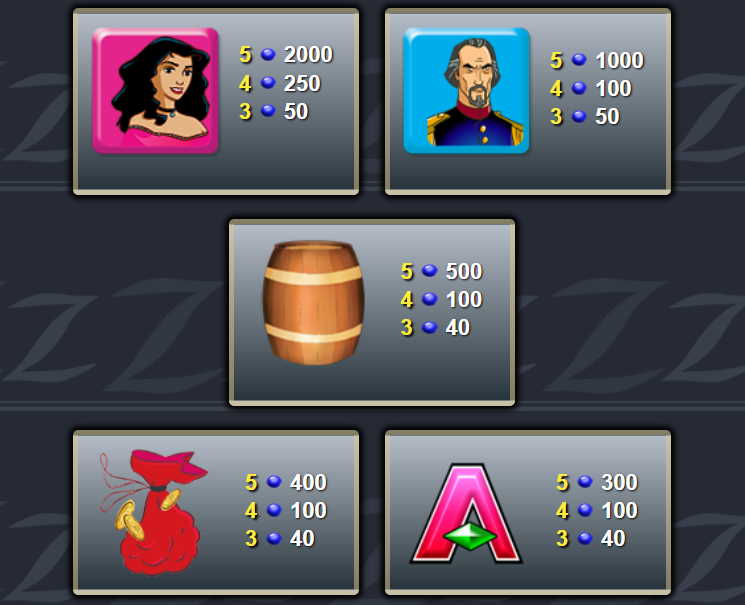 There are a several bonuses in this slot, as detailed below:

Zorro Bonus. It’s activated by clicking the Zorro Bonus Button. The letters Z, O and R will then appear on the reels and players will need to land them anywhere on reels 1, 2, 3, 4 and 5, completing the word. The letters don’t appear during the free spins, however.

Zorro Bonus – Tornado. Players will get a random bonus prize, along with 500X their bet on the game that started the bonus feature.

Zorro Bonus – Gold Coins. Players will be matching a prize by selecting coins until two of the same awards will be revealed. The award is an up to 500X multiplier on the game that started the bonus feature. 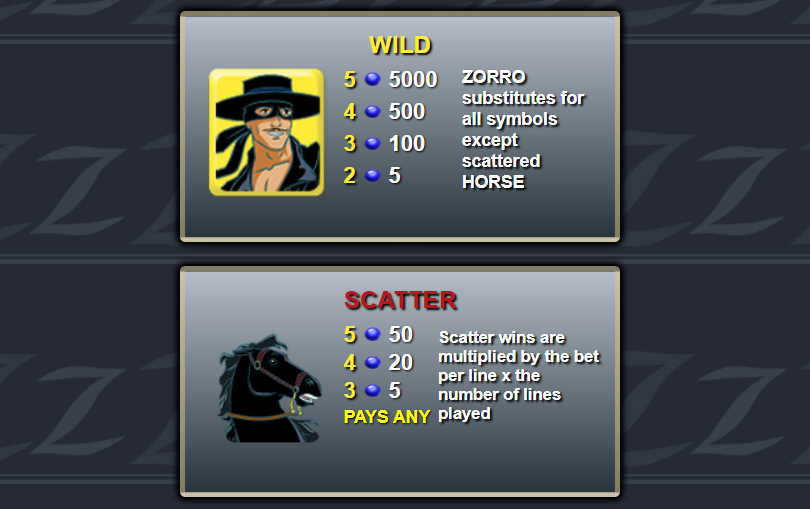 Zorro Bonus – Wild Z. Players will get 3 bonus wilds, along with 3 free spins. During each free spin, a Z will randomly show up on the reels, remaining in position until the free games are over.

Zorro Bonus – Barrels. Players will have to choose from a set of barrels that will award the following:

Zorro Bonus – Magic Door. Players will select a door to reveal a mystery character for 5 free spins. During the free games, whenever this character lands on the reels, players can select it to reveal a prize.

The news is not good if you want to play the Zorro slot machine online for real money, not to worry as you can always visit your local land casino and you might find it. The free play version of Zorro pokies can be played on our site though with no sign-ups.

All in all, Zorro can prove a fun experience. The RTP, combined with the volatility and the plethora of bonus features make it a slot that’s worth playing at least once. The wins are not life-changing but they’re enough to make Zorro worth a play. 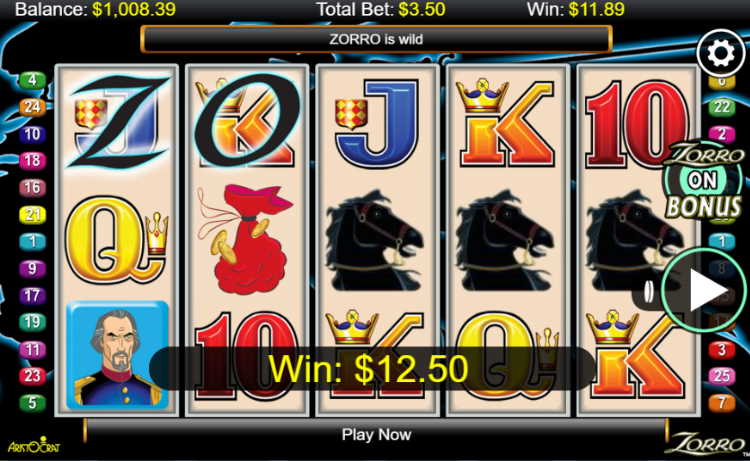