Great Rhino Slot is developed by Pragmatic Play. It is a high variance Megaways slot with an RTP of 96.58% and a maximum jackpot of 20000 times the stake. There are 200704 betways which is above average. The game was officially released in April 2020 and has become quite popular with players.

The theme of the game is safari and players will experience 6 main reels and one, extra reel at the top of the main ones. All of these is set in front of a Savanna theme. Reels display between 2 and 6 main symbols. 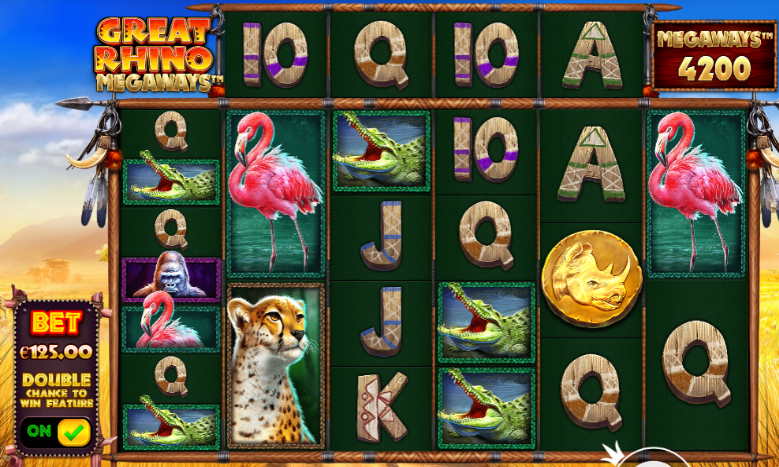 The extra reel on top displays 4 reels only. Players can explore the wild life of Africa and wind amazing bonuses and win coins. An interesting addition is animations of the animals behind the reels and also while reels are spinning. The minimum bet is 0.2 while the highest is 100. 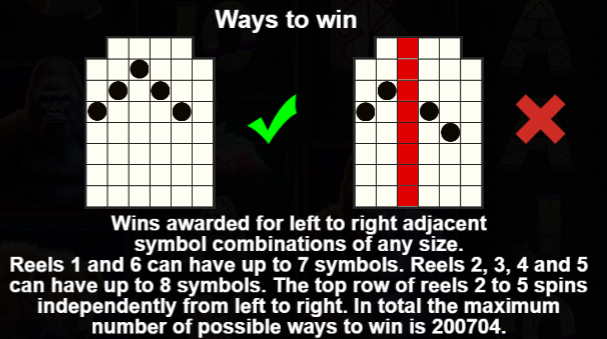 PAYOUTS FOR BASE GAME SYMBOLS

Great Rhino Megaways Slot has high-value symbols specifically designed for this theme and therefore the game. Low-value symbols are standard, A, J, K, Q, and 10. These cards represent playing cards K is king, Q is Queen, A is ace, J is a joker and 10 is 10. Below, in the table, you can see the payouts when symbols are present on the reels between 2 and 6 times. 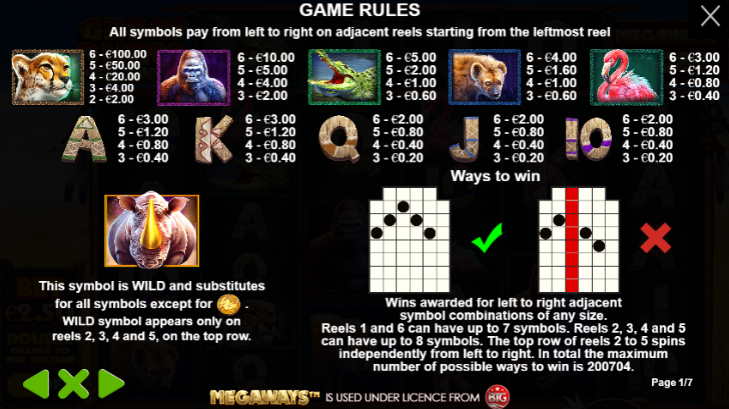 The wild symbol is present in the form of a Rhino with a gold horn. It is the most appealing symbol in the game and can replace all other symbols except scatter. The symbol will appear only on reels 2-5 and on the top row.

The tumble feature can be considered as a bonus feature. It means that after every win, the winning symbols will vanish and they will be replaced with new symbols falling from above. This will last as long as there are no winning combinations left. In addition, new symbols replacing the old ones will always be the same size as the ones they replace.

A coin with Rhino on it is the scatter and it gives free spins. It appears on all the reels of the game. Players need 4 or more of the kind to activate the free spins round. During the free spin mode, a tumble feature will also give 1 times multiplier initially and each winning is multiplied by the win multiplier present at that very moment.

During the free spins mode, players who win 3 scatter symbols more will get additional 5 free spins. This feature doesn’t have limits and can last indefinitely.

Players have the ability to choose a bet multiplier. Normal play is bet multiplier 20 times and bet multiplier 25 times. In the latter, the chances of getting free spins is doubled due to the fact more scatter symbols are present on all the reels.

Great Rhino Slot is a game themed on Africa’s wildlife and can give you massive rewards. Players can expect free spins, tumbling reels, and also a huge winning of 20000 x the stake.

This is a reasonably popular slot that can be played free on our site or for real money gaming at select Megaways online slot casinos. Gamblers who like wildlife themes and the chance of huge winnings will enjoy this game. 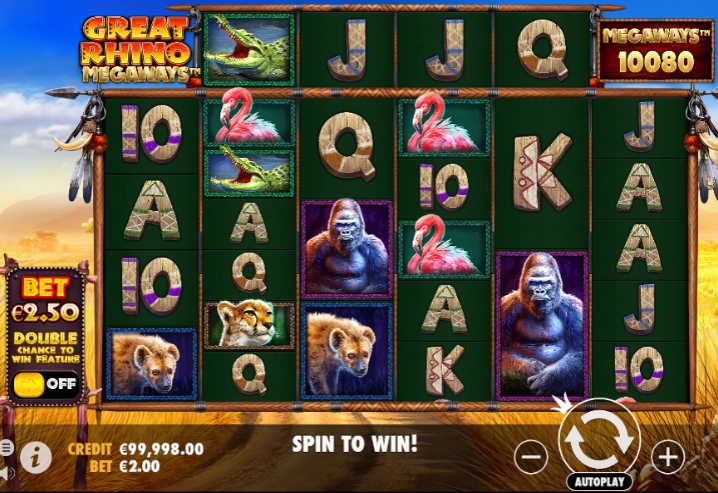